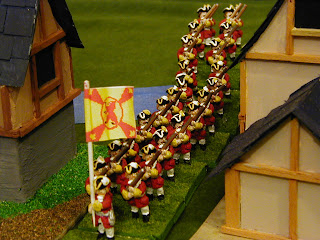 I am continually amazed by how much of my time has been taken up by the act of moving into our new home . . . and, as a result, I've not been able to get my RSM figures painted.

So, what I've done is to take my Great Northern War figures and use those as temporary substitutes for my Saxe-Bearstein units. Here then are some photos of some of these "temporary units" . . . okay, some of the line infantry units. 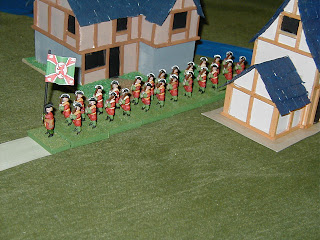 The first photo (note -- click on them to see a larger image) is of the troops I'm using for IR-2 von Becks.

The sharp-eyed amongst you might note that not all of the hat lace and pompoms are the same. That is because it was formed from two GNW Saxon units and correcting this would have been too fiddly.

Next we have a stand-in for IR-3 von Grolsch. If you note the red, green and white flag, it is quite similar to IR-8 von Urquell (aside from a different shade of green and yellow-gold instead of von Grolsch's white. 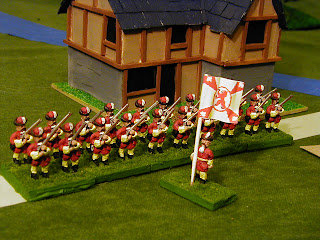 It is with the third photo, that of the substitute for IR-6 von Coors that we begin to really see the GNW flavor of these BLOODAXE MINIATURES (a supplier that I believe is no longer in business).

Note the hats. These were originally designed as Polish infantry (or as an alternate Russian figure). I've combined a number of them to create some more stand-ins.

I must say, however, that I miss the tricornes. 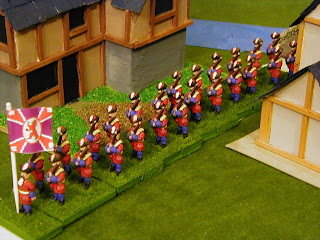 Their violet facing color is quite striking on the tabletop.

All of the previously mentioned units are regular "line infantry". The final photo is of something different.

I use a semi-diamond pattern when I base irregular troops. And these fellows are standing-in for IR-10, my Kokanee Grenzers.

The actual figures were taken from a number of Russian units (and, again, are BLOODAXE figures). 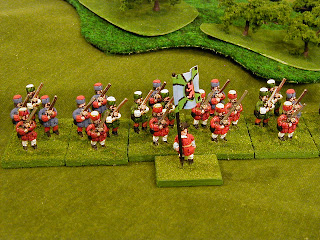 If you look closely, you can see the "diamond pattern" of basing. This looks particular good when they are on the tabletop as, under my rules, each stand rolls for its own movement.

This results in a very irregular mob look to them.

These aren't the RSMs I'll eventually paint, but they will serve in the interim.

These toy soldiers (and the buildings and terrain) have a wonderful old-school look to them. Very nice! Thanks for the pictures :-)

p.s. I'm curious to see what the cavalry looks like. Any pics of those? Artillery?

I will post more in a few days. I haven't taken photos of those yet (and I woke up feeling pretty lousy today . . . fighting some sort of winter bug I think).

For Cavalry I even have a number of different basing systems . . . Heavy Horse are in tighter formation than Dragoons are; and . . . well, you'll just have to wait a bit, won't you?

Sorry to hear about the bug. I know how that goes. Get better soon!
I shall look forward to seeing more pics.
Meanwhile I am reading through the back issues of Battlegames I purchased recently, along with these battle reports, and getting "jazzed" about doing some gaming myself. I'm working on finishing up a few more minis. Hoping to get a small solo battle in soon (might be after the holidays).

excellent photos Jeff, good to see them in more than the GRAND FIELD pose.

Nice photos, I'm sure they'' see off the opposition

...I was so enthused by the look and feel of your figures, I went off to find out waht more I could about Bloodaxe. Appararently they are still in business (at http://www.bloodaxeminiatures.com/) but no tricorne period troops listed, so they may not be the same guys... shame really, as your figures show a real charm...

Jeff, they look *good*, and I'm not an @ÒÒ-retentive 'historical' to complain about the 'old-fashioned' cut of their uniforms (so much the more as I prefer the 'justaucorps' of the WAS over the 'coat' of the SYW)!

And lost are in tricorns, indeed an essential detail. OK, I'm ready to accept a 'minority' in more 'exotic' headgear, it may add 'individual / national character' to the army.

Thanks for sharing: I staytuned for thr other Arms....
Jean-Louis

I've got a little IT problem, Jeff, that I don't know if anyone else had.

When I clicked on the photos to enlarge them, instead of opening a new window pop-up of the enlarged photo as usual I got a MS pop-up asking me if I wanted to download the picture or open it. (Just like when you right click on a photo or the like to see about downloading it.)

When I opened it, it used my own PaintShop Pro programme on my p.c. to open it, and not the usual opening up in a new window.

BTW, it looks like it's happening at all the blogspot blogs. I guess they've changed how they work.

I've noticed this too . . . but it only seems to be the case on "new posts". Photos on older posts still open the regular way.

Any chance of a link for The Imperium on E v E ? thanks Alan